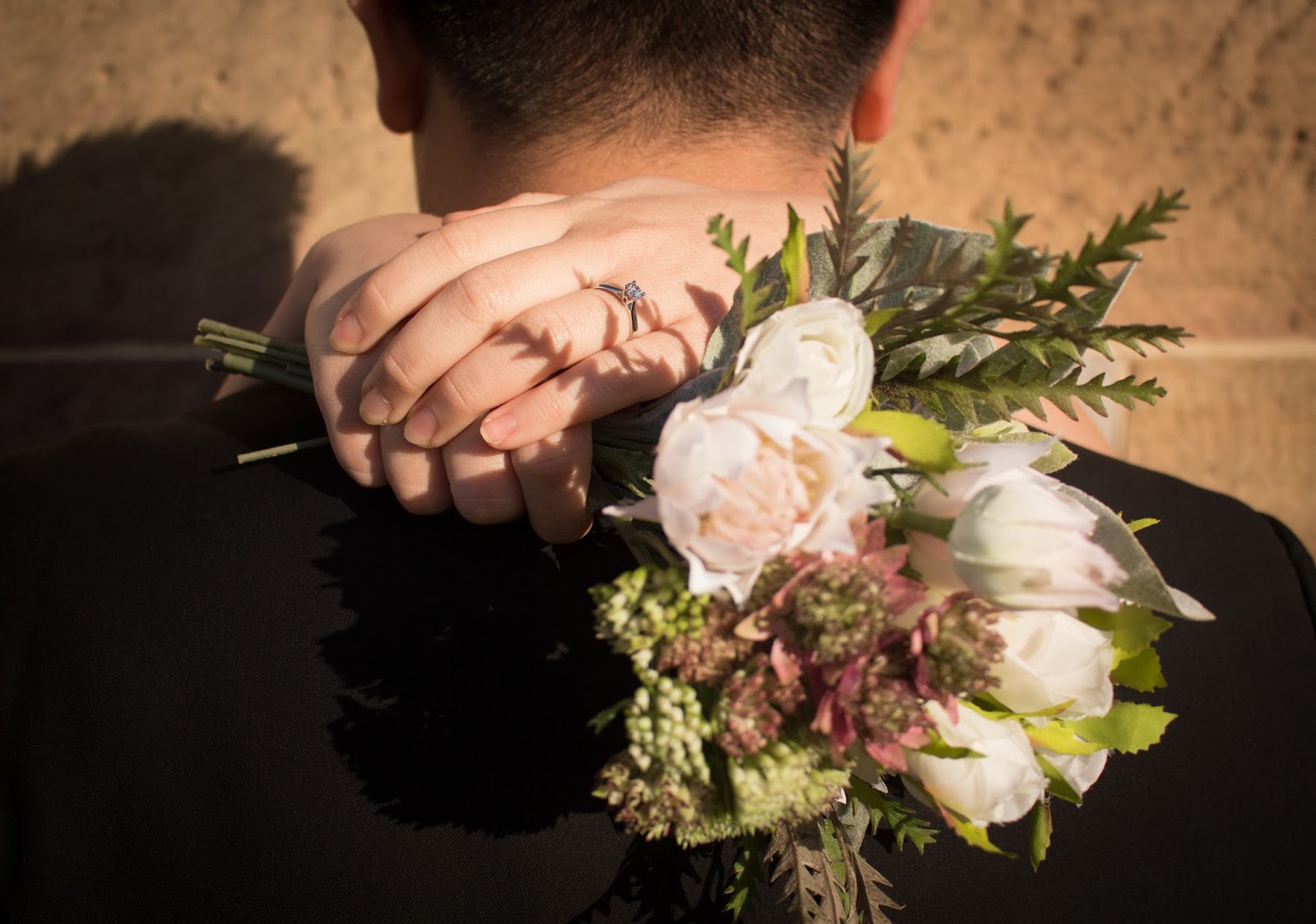 One of my weaknesses would be the lack of consistency, even to the things I love to do. Passion itself isn’t sufficient; it is the daily commitment that comes with it. As I battle through life and learn from failures, to some extend I have also learnt to embrace the change, the surprise and unexpected growth that comes along with it.

Why am I saying this?

When I first activated this blog after a long while, I didn’t know exactly where it is heading. I knew that within me I have always wanted to connect these platforms of interest together. From my personal life, to travel, to create, to write about artworks and exhibitions, and issues relating to border and travel, that it will all merge perfectly.

This post is sure to pave the path, bits by bits into the other aspects of my life.
Shall we begin?

My fiancé, V and I have already started discussing about marriage, and at the same time we were also planning our trip to Sydney, Australia. The decision to D.I.Y our engagement shoot wasn’t completely for the sake of budgeting per se, it was plainly the idea of gaining a sense of ownership from top to toe that somewhat triggered the excitement. And with me being completely ambitious, planning for the shoot during our travel in Sydney, and in WINTER sounds just perfect!

I have to emphasize the weather because V perspires profusely in humid summer when in Singapore and Malaysia. Wearing a suit or a formal wear for an outdoor shoot in these countries, unless on a windy day, would be extremely uncomfortable. And I love the cold! I’ll get into the pros and cons later on.

These are the places we went for our photoshoot.
Centennial Park
Darling Harbour
St.Thomas Church
Paddington Reservoir
La Perouse (most couples were doing their shoot there during sunset!)
University of Sydney
Macquarie Lighthouse

In fact I felt Sydney do have tons of awesome sites in each of the seasons. I suppose these areas are all accessible for the shoot. Please do not attempt to take your engagement shoot at St. Mary’s Cathedral without permission; you will surely get into trouble. We were there as a visitor and encountered a couple with a photographer arguing with the guard who warned them.

You may check out these sites.(Places not named based on areas or proximity)
Bondi Beach
The Grounds of Alexandria
Wendy Whiteley’s Secret Garden
Hyde Park (though I actually think Centennial Park is a way better option because it has a variety of locations such as Paper Bark Grove, the Rose Garden, the Lily Pond, the Duck Pond, and Willow Pond.)
Bradley’s Head
Observatory Hill
Martin Place
Cockatoo Island
Watson’s Bay
Sydney Harbour Bridge and The Opera House
The Rocks
Mt. Wilson
Hunter Valley
Luna Park
Sydney Royal Botanic Gardens
Hiking enthusiast? Blue Mountains!
And the lists goes on and on….

Though this is already a trend, many were still surprised to hear we did it on our own. How?

Changing of costumes
We did our shoot on several days, and we didn’t plan to change much attire. The only time I changed was in the public toilet in Centennial Park. A friend D.I.Y their engagement shoot in Iceland and their car was the changing room.

Accessories
Though I prefer actual flowers better, I thought I’d go easy on the bouquet and also D.I.Y artificial flower crowns to enhance my look. I ordered the bouquet from Flowerama instead of visiting their store, as it is located in the outskirts of town from central Sydney. I did not measure the exact dimension and the bouquet was rather petite. But I do love the flowers and the quality!

How did we take our photos?
Pretty straightforward! With out Sony A7RII and tripod, and with the access of the PlayMemories Mobile app, I do not have to set a timer and run for the pose. All we did was adjusting based on what I see on the phone, set the timer, and hid it. Hah!

There are a few shots done by a friend who was trying to build her portfolio in Sydney and it’s free of charge. We treated her with meals in gratitude. Some were taken from my cousin sister who came along during the surprise proposal.

Car Rental
Most days we took the public transport while traveling. We rented the car a day in advance before our road trip to Snowy Mountain, so we took some shoots on that day, and after returning to Sydney from Snowy Mountain.

Cons
-If it is tiring even for those who engaged the professional, what more for those who D.I.Y-ed their engagement shoot. From waking up early to do my own make up and hair-do, navigating on an unfamiliar land and driving the car, finding the perfect spots for shooting, gathering our guts to be silly, adjusting the right pose, brave through the winter wind, we were terribly exhausted at the end of the day.

-We weren’t able to multitask during the shoot so most of the time we did not keep ourselves warm enough and we came down with flu.

-Engagement shoot is usually where you work out your photography style with the photography team, and get to know them better before shooting the actual day where you want to be at ease. But for us it’s a different case, but I’ll have faith after careful recommendations and selections.

-The pose and angles for the shoot gets limited.

Pros
-You get to flexibly arrange and explore different sites.

-Being comfortable because you don’t have people watching you and asking you to kiss or to be intimate, it all comes rather naturally when it’s just us. It all depends really because most couples now are quite shameless in front of the camera in this age! Including us.

-We won’t be able to face the choice of selecting thousands of photographs and spend more than we paid for the package. Some examples we heard were the photos turned out all to be great, which is brilliant! But they had difficulty choosing the required number of photos; hence they pay more for all their other favorites’.

-Set aside the traveling expenses that we’re going to spend anyways, we did save up an amount to be spent on the wedding itself. You may think it’s not worth the experience for such hard work and efforts, but I shall leave that up to you.

-Most importantly, we managed to have a wonderful time working on this together with much patience and toleration. However, it is that sense of ownership that we preciously gained. The photographs aren’t glamorous, ain’t terrific, yet it is unique on its own to share who we are and what we were able to do together on this.

Prior to some photography skills is needed of course; you do not want to turn this into a nightmare. There is a reason in hiring a professional and experienced photographer, for us, we shoot and edit based on our capabilities.

Some asked, “So are you still going for another photoshoot session?”
No, we did not pursue further. Will I regret? I bet not. In fact, I might just D.I.Y all the way from maternity shoot to newborn photographs, and whatever occasions that comes after.

If you have the time and budget, you could go for both D.I.Y and professional shoot, or even travel and shoot starting from today!


I edited all the photos and it was time I find out how to print them out. After researching, these were the things I wanted.
1.    A platform that is easy to use and is simple and elegant. I could do completely from scratch but I choose not to.
2.    A hardcover lay-flat album. Not a photobook.
3.    Matte, not glossy prints. It’s a personal preference.

After comparing the price and quality, I decided that I would not compromise and instead pay a little more for the printing of the album. After stumbling upon Artisan Print and worked my way through within the budget set, in the end I chose Fabric Wrap Artisan Paper Hard Cover Lay-Flat album.

I was delighted upon collecting our album at their store. However, let me mind you on something if you do decide to print with them. There’s only one issue I had, which is the black and white photo in the album. It turned out to be rather greyish and with a lack of contrast. It was also my mistake that I should have consulted and I shouldn’t have included such a tiny figure that caused it to be a little distorted when printed stretching from one page to the other. Other than that, everything turned out perfect and as expected. I knew the colors would be duller compared to glossy prints. So if you’re going for matte artisan paper, be sure to select brighter photos, with more vibrance and saturation. Regardless of the flaws and imperfections, it’s an album we call our own fully. (I will attach the photo of the album some other time!) 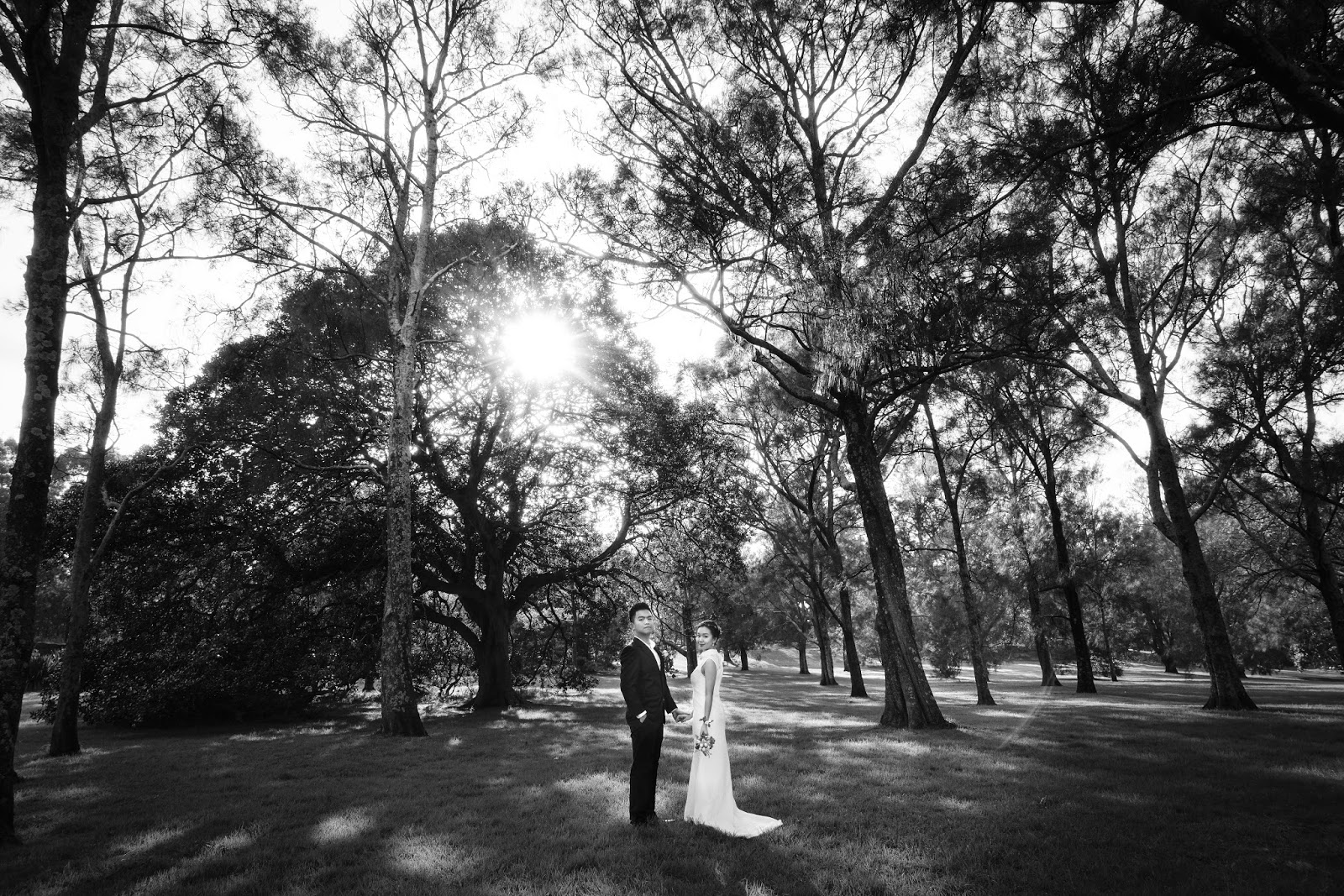 I will end with the story of the surprise proposal.

You may think it is ridiculous because we were already there for the shoot, why does the proposal come after? While we were discussing about the wedding, I so proudly told him that a proposal ring isn’t needed. He was initially in denial and he believed I would regret saying it, but soon after he played along. And I smiled at the fact that he agreed in giving a diamond ring after each childbirth. How promising, hah!

That evening before the trip, I foolishly joked if he was going to kneel down to propose during the trip. He exclaimed so firmly on what we had both agreed earlier and I told him I was only teasing there and then. I am not lying when I said the thought of it had never again occurred in my mind throughout the trip.

He started researching about the ring a couple of months ago and ordered from Jann Paul just in time. V was praising the services offered there and was given a thorough explanation on what and how-to choose.

My cousin sister was the secret coordinator, and they have all pretended so well! During our shoot in La Perouse on the second last day, our photographer friend suggested us to do a proposal pose. I figured it makes no sense to purposefully pose for it and I rejected the idea. V just followed and my cousin insistently passed him an “earring” box. My cousin brought lots of accessories knowing that we are here for the shoot so I obliged unquestionably. It was also very windy at the coastal area and I can’t help but constantly shivering and my mind went blank at most times.

For a second I thought to myself, “This is quite an exquisite black casing!” He opened it and I was expecting to see a pair of earrings, how naïve! I was in doubt, more in shock for a really long while. I’d call it a really surprise, unanticipated proposal after all!

Exactly a year ago, we flew a sky lantern in Taichung.
He had written on top, “Get married to me soon”.


Scroll down to find more our photos below 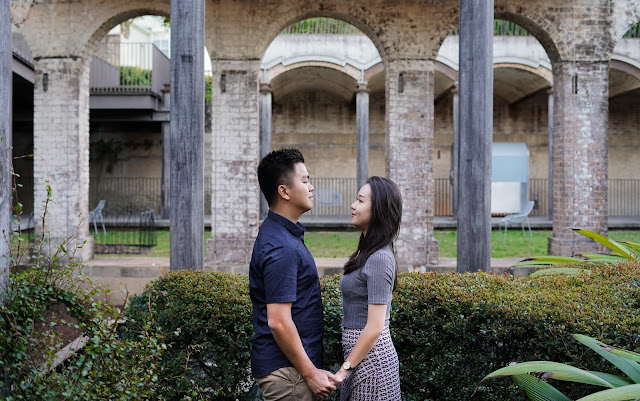 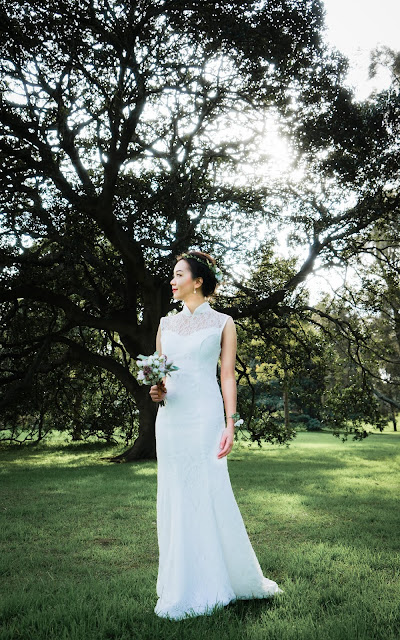 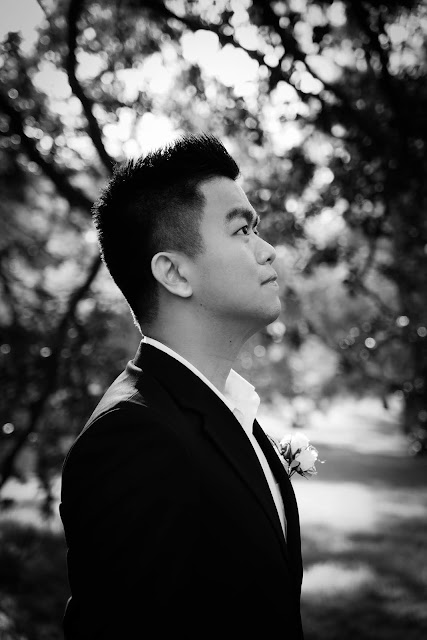 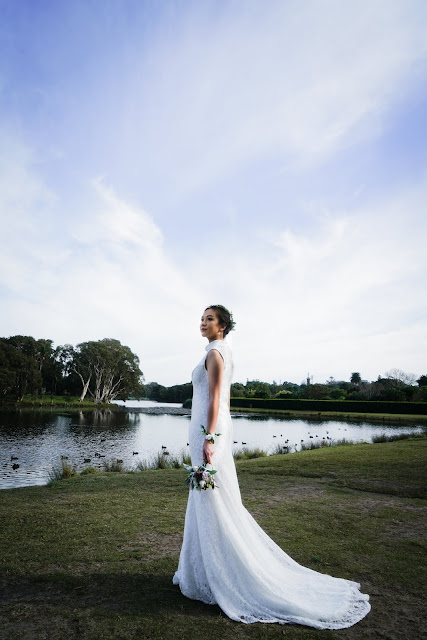 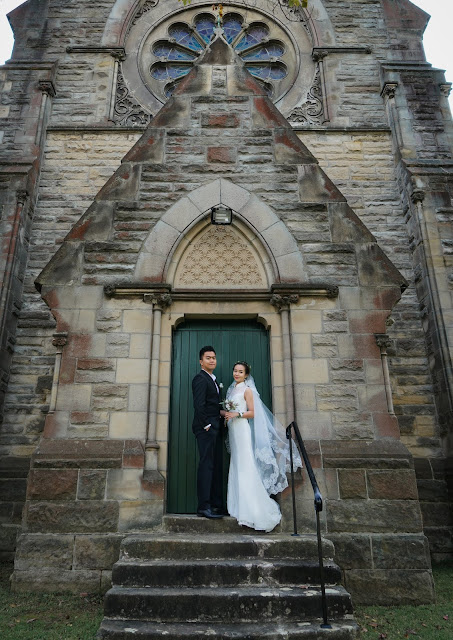 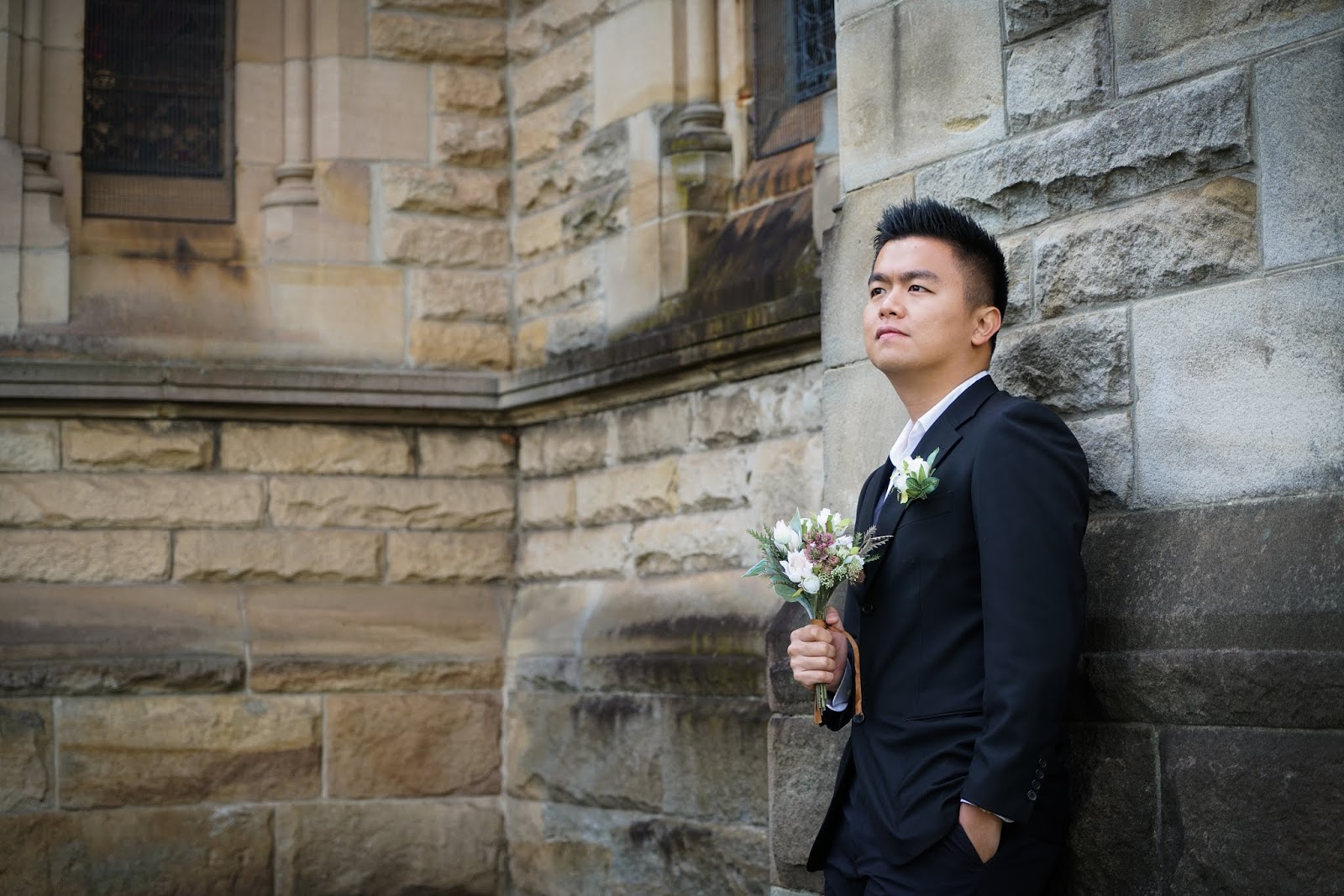 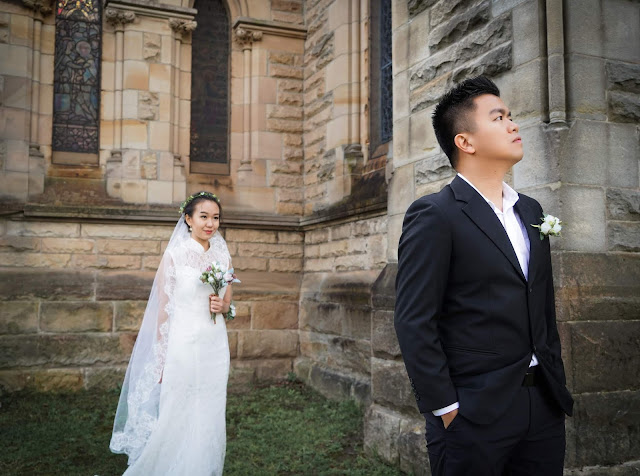 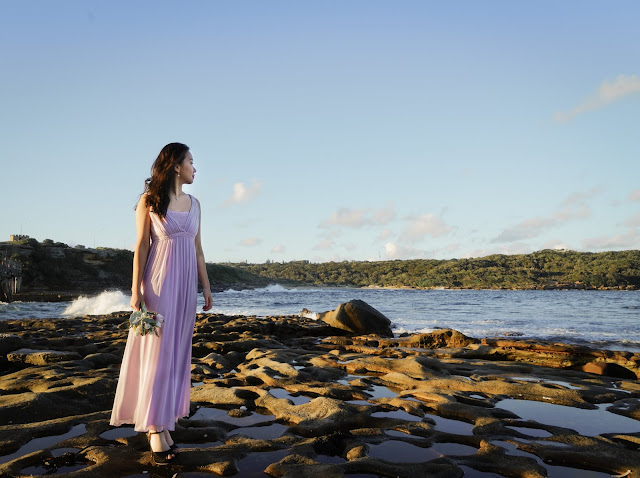